Why people resist or accept change.

How to use the Force Field Analysis tool. 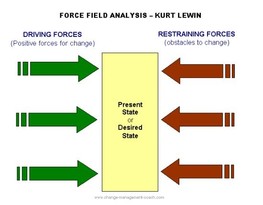 ​First, list all of the factors (forces) for and against your decision to change.  Identify as many factors that will influence the change and involve the appropriate individuals in your organization that can give input on the list of factors.

Second, give each factor (force) a score based on its’ influence on the decision to change.  Perhaps assign 1 for weak and 5 for strong.
​
Third, add up the score for both and the one with the greatest number wins!  Then take a look at ​strengthening the forces that support the change and manage the forces against the change for success!

Using the results of the Analysis.

Now you have the results of your analysis it is time to decide if you are ready to act on the results of the analysis.   Think about the forces in the organization that will support or not support this decision and how you can strengthen the support for your decision.  Example, if you are implementing a new procedure, consider the necessary changes that must be made for your decision to change  to be successful i.e. hiring new personnel; training personnel; making additional purchases.
Recommended guiding steps when using the Force Field Analysis:

There are factors within an organization that do not fit well using this concept. Factors like the safety and health of individuals should be seriously considered when making decisions based upon the Force Field Analysis concept/tool.

Also this concept is great when identifying forces that effect decision making and change but it can be very subjective.  When making important decisions, it is recommended that additional decision-making tools are used with the Force Field Analysis tool.